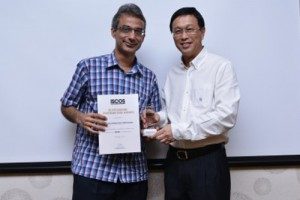 Less than two years of volunteering in ISCOS and Prem has already left positive imprints on people’s lives.

We tip our hats off to this unassuming IT Manager at Institute of Molecular and Cell Biology (IMCB), A*STAR, husband, and son to an aged mother who never fails to impress us with his dedication and passion to serve others. Juggling work and family responsibilities, he is a shining example of what it takes to be an agent of change.

“I always believed in ‘kampong-style’ living where every member of the community shares and helps each other out. You really cannot change others without being a change agent yourself,” said Prem.

He initially served as a Co-Facilitator in ISCOS Support Group in October 2011, listening to ex-offenders share their life experiences and struggles in reintegration, then guiding them to finding positive affirmations amongst each other. This was no small undertaking, as he was involved in twice a month sessions, held after regular working hours.

“I feel for them and empathise with them on their issues. Instead of going to their old kakis (friends), it helps that ex-offenders have a safe place to share their struggles with,” shared Prem.

Wanting to take his volunteering to the next level, he signed up for the Mentoring Programme afterwards, a one and a half year programme which involves letter writing and prison visits to his mentee, leading up to continuous mentoring when his mentee was released into the community.

“There is no greater satisfaction than to be able to help someone change for the better and find determination to stay on the right path,” he enthused.

An avid soccer fan, Prem took special interest in the ISCOS Football Club. Now serving as the team’s manager, he regularly meets with the players and other ISCOS FC volunteers for practice, friendly games or local competitions.

It has not been easy managing different personalities in the team. “Even though there were challenging moments, we learned to accept each other’s differences and exercise tolerance which was really comforting,” Prem added. He helps to identify other reintegration needs of the ex-offender players so that ISCOS can assist further.

Prem was conferred the Outstanding Contribution Award at the ISCOS Appreciation Dinner 2012, a recognition of his laudable impact and indomitable spirit in volunteerism.

“My volunteering journey in ISCOS was very fruitful and fulfilling. I have grown a lot as a person. There is more to life than just making a living and attending to one’s responsibilities. It’s through volunteering that one can find deeper personal satisfaction.”