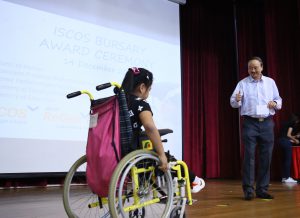 At the Bursary Awards Ceremony on 14 December 2018, we were happy to witness our student beneficiaries receive their hard-earned rewards on stage for persevering in their studies. This was also a record-breaking year for ISCOS, with over 310 recipients from the primary, secondary and tertiary levels receiving the bursary awards and book grants.

In addition, two new awards were introduced: the Outstanding Achievement Award (OAA) goes to recipients scoring 80% and above, while the Good Progress Award (GPA) goes to recipients who have made significant progress. Recipients of these awards get an additional cash reward on top of the bursary award or book grant received.