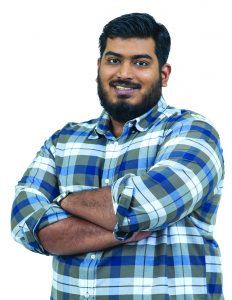 With a passion to serve, Ameer started volunteering since young to help the underprivileged. Though he was not a newbie to volunteering, the journey with ISCOS has been a noteworthy one.

Ameer came to learn about ISCOS through a friend in 2015, and was intrigued by the work and individuals engaged by the co-operative. When he asked how he might help, he was referred to the ISCOS volunteer portal.

“To be honest, I was pretty anxious when I signed up, possibly because ISCOS works with a special group of people. These people suffered from a social stigma that made the community sceptical in giving equal opportunities. This is a notion which after-care agencies such as ISCOS and volunteers like myself have a part to play in combating.”

Over the past two years with ISCOS, Ameer had been actively involved as a mentor, support group co-facilitator and even as emcee for the bursary awards event. Amongst the various roles he played, the one which left the most lasting impression on him was during his time as a mentor under the now-defunct Reformative Training (RT) Mentoring Programme. As an RT mentor, Ameer was matched to a youth mentee, where they were required to meet and interact face-to-face for at least an hour every month. Ameer’s role was to lend a listening ear and be an encouraging friend to the mentee who had plans to complete his O-Level education in prison.

Ameer recalled, “It was very tough for him. Being a secondary school dropout, he was quite hesitant to sit for the placement test that would allow him to study in prison because he was not sure whether he could pass the examinations. Yet, after several rounds of talks trying my best to encourage him, he was finally convinced and decided to go for it.”

“I remember telling him that education could be his second chance in life, and it was really up to him to decide his own fate. I believed in him, and he had to believe in himself. In the months leading up to the examinations, what amazed me the most was his aspirations and desires to change for the future, which kept him focused on the books and to persevere whenever he was too tired to study at times.”

Within the walls of the Changi Prison Complex, the initial encounters between two strangers gradually blossomed into an amicable friendship. Throughout the year, it had not been easy for Ameer as well, juggling work and studies while making arrangement for the monthly prison visits and planning how to better support his mentee.

Their hard work finally paid off. The duo was overjoyed when the mentee received his O-Level examination results – he had aced his studies and even achieved a distinction in Mathematics. Today, the mentee has been released and currently resides in a halfway house where he hopes to further his tertiary education at one of the local polytechnics.

“Seeing him through this personal journey was one of my best and most fulfilling volunteering experiences.”

ISCOS takes this opportunity to express its deepest appreciation to Ameer and many like-minded individuals who have invested their time and efforts with ISCOS to impact the lives of members and beneficiaries. Thank you for volunteering with ISCOS!