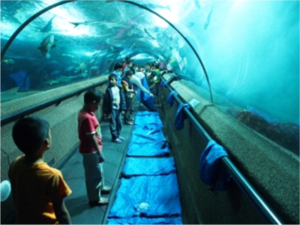 On 26 June 2016, we bade farewell to one of our CSR partners, Underwater World Sentosa (UWS), as it closed after 25 years in operation.

UWS’ collaboration with ISCOS dates back to as early as 2008, where it became the venue sponsor for ISCOS events such as Children’s Day (2011), Workplan Seminar (2012), and others. One of the most unforgettable moments would be the Living in the Ocean programme in 2012, which gave 35 lucky beneficiaries from the Fairy Godparent Programme the rare opportunity to spend the night in the attraction’s iconic underwater tunnel, camping under the fishes. It was a resounding success, with many participants reminiscing the wonderful experience of getting up close and personal with the marine creatures.

UWS was also one of the employers we have partnered with under the Corporate Doors initiative in 2012, and had hired some of our members. In recent years, UWS continued to support our cause through monetary contributions.

Thank you UWS, especially Mr Kwek Meng Tiam, who has been ever supportive in bringing joy to our beneficiaries. Thank you for all the fond memories which we will continue to treasure for a long time.