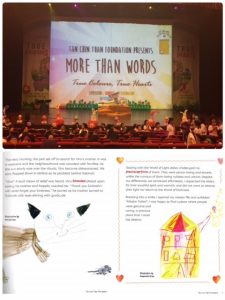 A total of nine children beneficiaries from the Yellow Ribbon Fund-ISCOS Fairy Godparent Programme (FGP) were invited by the Tan Chin Tuan Foundation (TCTF) to its “More Than Words” Showcase held on 8 September 2016 at the Anglo-Chinese School (Independent).

Themed “True Colours, True Hearts”, one of the highlights for this year’s showcase was the launch of a special book featuring the artworks of eleven FGP beneficiaries. These artworks were completed during a creative writing workshop with TCTF back in March 2016. In addition, the showcase also presented a theatre performance of The Little Prince, which proved to be an enjoyable and educational experience for the children.

Initiated by TCTF in 2013, “More Than Words” is in line with its focus on education and community development, andoffer opportunities for underprivileged children to participate in music, dance, arts & crafts and other fun educational activities.