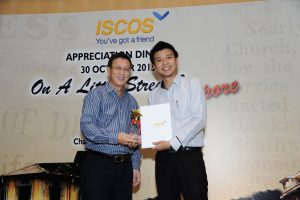 A photograph is a powerful tool to communicate and reinforce our social mission, recognize our team members, and especially, our volunteers. It helps us tell the story we want to share with our donors and the society.

As a volunteer photographer at ISCOS, Daryl Lee, 37, has captured many significant moments, beautiful smiles, and raw emotions of our beneficiaries and volunteers in many ISCOS events.

“Volunteering with ISCOS allows me to use my passion in photography to capture important events which, at the same time, can be used as a medium to increase the awareness of the cause I am supporting.  It gives me a different kind of satisfaction every time I click my camera to take photos, knowing that what I do is making a difference in someone else’s life.”

Since 2010, Daryl has been actively supporting ISCOS’ community initiatives as a photographer.  From ISCOS’ website to its annual reports and e-newsletters, his photographs illustrated ISCOS’ developments and achievements over the years.  Daryl’s dedication is evident from his consistent volunteerism and interaction with our beneficiaries.  For ISCOS, Daryl is considered an integral part of its family.  His close and cordial relationship with ISCOS management and staff is equally admirable.

On 30 October 2015, at the annual ISCOS Appreciation Dinner, Daryl’s volunteerism reached a milestone when he was presented with the Silver Tribute Award for contributing generously his time and talent in the last five years.

“I believe in the cause of giving second chances and I am glad that I was given this opportunity at ISCOS.  For me, extending friendship is about assisting each other in ways we are capable of and not based on equal effort or value.  Nobody can do everything but everyone can do something.”