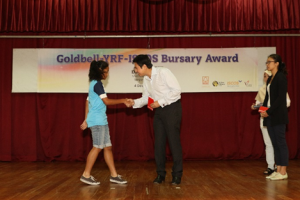 More than $72,000 worth of bursaries was distributed to a total of 195 deserving students this year, of which 109 recipients proudly received their bursaries at the Goldbell-YRF-ISCOS Bursary Award Ceremony. Held at the Queenstown Community Centre on 4 December 2015, the ceremony was graced by Dr Chia Shi-Lu, Member of Parliament for Tanjong Pagar GRC, alongside Mr Arthur Chua, Chief Executive Officer of the Goldbell Group, the exclusive sponsor of the bursary awards.

The bursary award is one of the key initiatives under the Fairy Godparent Programme (FGP) since 2011 to reward beneficiaries who have achieved above average results in their studies. Apart from defraying the costs of school books and stationery, the bursaries serve to encourage the beneficiaries to do well in school despite their financial challenges and family situations.