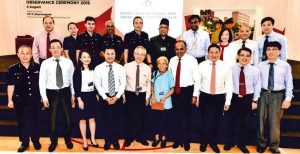 First row: Ms Joy Tan (3rd from left), together with the other Awardees with the Minister for Home Affairs and Minister for Law, Mr K Shanmugam (4th from right).

Joy, as she is fondly known, first joined ISCOS Board of Directors in May 2008 and was appointed as the Vice-Chairperson since May 2008. As an esteemed partner of Wong Partnership LLP, she shared her expertise by providing strategic counsel to ISCOS on relevant legal matters and has been instrumental in advising the management in areas related to governance over the years.

Despite her busy schedule, Joy contributed to our social cause as a volunteer, actively participating in the programmes and fundraising activities. She also represented ISCOS in many of our events which were typically organised during weekends.

We sincerely thank Joy for her unwavering support to ISCOS, a true and humble way of extending friendship to the underprivileged groups we serve.