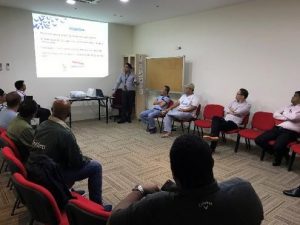 Before we wrap up the year of 2016, ISCOS held its final round of Fireside Chat on 21 December 2016 with 11 ISCOS members in attendance.

During the session, the ISCOS team did a round-up of the various programmes and services offered by ISCOS before inviting the participants to provide valuable feedback on how we could better support ex-offenders and members in their reintegration journeys. It was encouraging to witness active participation from the attendees, including Mr Alex Yeo (Member of ISCOS Board of Directors), Mr Patrick Ng (Executive Director) and Mr Elvis Overee (Deputy Director), who interacted and exchanged constructive ideas with the members.

The Fireside Chat is a quarterly initiative from the ISCOS Support and Guidance team with the objective to engage and build rapport with its members.