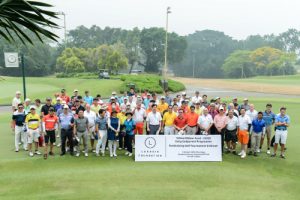 At its first Fundraising Golf Tournament and Dinner event on 1 October 2015 at the Sentosa Golf Club, ISCOS successfully raised a total  of $137,425, which will go towards the Yellow Ribbon Fund-ISCOS Fairy Godparent Programme (FGP), an initiative that supports children and families of ex-offenders.

Mr Seah Kian Peng, Deputy Speaker and Member of Parliament, Marine Parade GRC, graced the event.  Supported by Title Sponsor, Luxasia Foundation, the tournament attracted 103 players for a tee-off at the greens after a hearty lunch. Later in the evening, the guests proceeded to a sumptuous dinner at the Grand Salon, coupled with lucky draw and silent auction segments. They were also mesmerised by the entertaining performances by the ‘Unbillables’, a band formed by friends from Baker & McKenzie.Wong & Leow.

On behalf of the FGP beneficiaries, ISCOS sincerely thank all sponsors and donors, in particular the title sponsor Luxasia Foundation, and others who have contributed to FGP in both monetary and in-kind donations.