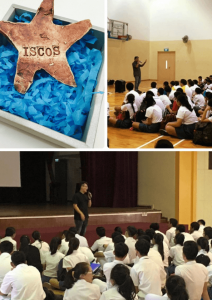 As part of the National Education initiative by the Singapore National Co-operative Federation (SNCF), two of our ISCOS Motivators, Mr Jabez Koh and Mr Zulkhairee Udik, shared their  life experiences to students ofBendemeer Secondary School on 25 and 26 July 2016.

During these sessions, the ISCOS Motivators had the opportunity to spread the positive message of determination and second chances to the young generation.

The ISCOS Motivators Programme recognises  reformed members who arewilling to give back to the communityby sharing theirlife stories. Many times, these stories of grit and resolvehave encouragedand inspiredthose who have listened to them.

ISCOS looks forward to many more collaborations with other educational institutions in the future.