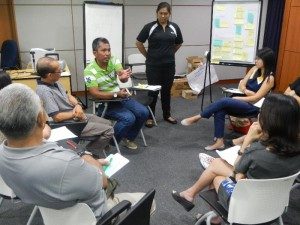 A total of 25 ex-offenders shared their views and aspirations at “Our Singapore Conversation” (OSC) dialogue organised by ISCOS on 27 April at Civil Service College. They were joined by 10 supporters of ISCOS comprising ex-offenders, volunteers and Directors of ISCOS.

Participants raised common issues such as employment and accommodation for ex-offenders, stigma associated with ex-inmates, family support, and rising cost of living.

Mdm Phang Seok Sieng, Executive Director said: “This OSC dialogue is very meaningful as it enabled ex-offenders, who usually struggle with issues of acceptance in society, to contribute their voices to the key issues concerning many Singaporeans today. The discussion also served as a platform for ISCOS to listen to their concerns and see how we can improve our programme and service delivery to better meet their needs.”