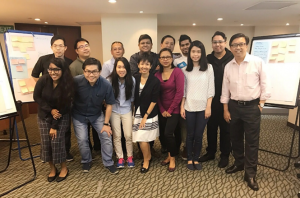 Striving for continuous improvement in the quality of our work in ISCOS, all staff came together and participated in the ISCOS Workplan Retreat on 26 and 27 October 2016.

The Workplan Retreat is an annual event to reflect on the actual achievements in the current year and how we could do better in 2017. There are also discussions on implementation of future plans within ISCOS, based on the directions and strategies outlined by the ISCOS Board of Directors during a separate Directors’ Retreat conducted earlier in July 2016.

After the presentation of report cards and upcoming plans by the different branches, we had a great time engaging in activities aimed at promoting team-building and motivational goal-setting. The highlight of the retreat focused on the deliberation of ISCOS’ core values, which offered everyone the opportunity to express their expectations on how they envision ISCOS to be.

Mr Daniel Teo, Chairman of ISCOS Board of Directors, showed his support by his presence during the retreat to share his strategic views and insights.