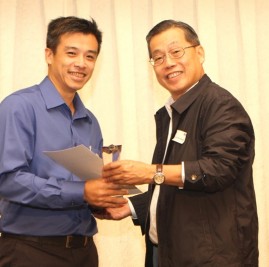 What started out as a charitable act to make a monetary donation ended as a varied volunteering experience for Leroy Ang.

From 2009 to 2010, Leroy has been involved in many ISCOS events. Due to his willingness to avail his assistance in any area needed, and his love for outdoor activities, he has been assigned the roles of a guide for an educational tour, a master of ceremonies, and overall co-ordinator for telematch games during the ISCOS Family Day.

Moreover, he enlists the support of his business counterparts and relatives to donate to or volunteer with ISCOS. Even as Leroy’s own business entails him to travel overseas, he would always avail his help in major ISCOS events.

While Leroy takes work, family and volunteering commitment in his stride, he admitted that it is challenging at times. “However the support from my wife Joanna, coupled with proper time management, helps resolve most of these challenges. Everyone makes choices daily. Since I have made mine (to volunteer with ISCOS) I will commit to it. If there is a will, there is a way,” he added.

For Leroy’s contributions as a volunteer who had assumed leadership roles and participated in at least three events and programmes from 2009 to 2010, he was presented with a Star Award at the ISCOS Appreciation Tea last year.

“I am surprised as I did not expect to get anything in return for volunteering. I am honoured by ISCOS’ recognition. It has been a fulfilling journey volunteering with ISCOS and I urge all my family and friends to join me in this journey,” Leroy said.

Leroy is certainly someone who walks the talk. With a group of passionate and committed volunteers like him, ISCOS is inspired and empowered to reach greater heights in the care of her members and their families.