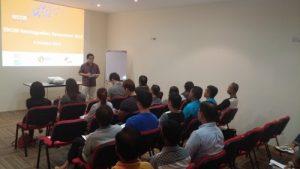 To support the members positively in their reintegration journey, ISCOS organised its first Reintegration Symposium on 3 October 2015 at its premises as a platform for ISCOS members to hear from peers who have successfully overcome different challenges in their rehabilitation and reintegration. During the event, a total of 20 participants were inspired by  real-life stories of three members who shared about their own experiences, challenges and struggles before getting back on their feet.

In addition to the members’ sharing, the symposium also gathered representatives of other community and aftercare working partners such as the Social Services Offices @ Kreta Ayer &amp; Bukit Merah, Yellow Ribbon Fund, and the Singapore Anti-Narcotics Association, whopresented their programmes and services which can meet the different needs of ISCOS members.

The event received positive feedback from the participants, who find the three-hour session useful as they did not onlyhear from others who have been through similar experiences, but also  gaininformation on where to seek help from the community partners.