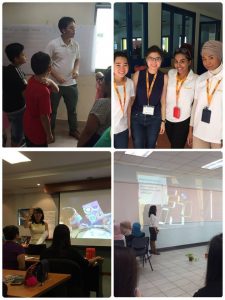 We successfully concluded the final series of the tri-event workshops for parents, youths and children under the Yellow Ribbon Fund-ISCOS Fairy Godparent Programme (FGP) on 24 September 2016.

Themed “Creating a Positive Environment through Positive Interaction”, a total of 116 participants basked in fun-filled activities of role playing, art and crafts, and other hands-on games at the Geylang Serai Community Club. The workshops aim to equip the participants with the skills and knowledge to positively change their environment and to live a purposeful life. The workshops received positive feedback among the participants, with many saying that they are eager to sign up for more similar workshops next year.

ISCOS would like to appreciate the facilitators who have worked with us in this event – Elizabeth Rutten-Ng (Embodied Movement – Dance Movement Therapy), Vadivu Govind (JoyWorks), and Billy (Singapore Association of Social Workers). Thank you!