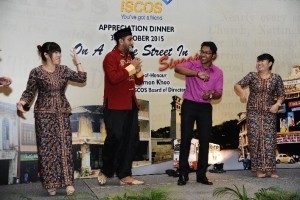 To express our gratitude to our sponsors, partners and volunteers, the ISCOS Appreciation Dinner was held on 30 October 2015 at The Grassroots’ Club.
In conjunction with SG50 celebrations, this year’s theme was “On a little street in Singapore”, where guests dressed up in different fashion styles with a local flavour. A total of seven corporate awards and 42 individual awards were presented to ISCOS partners and volunteers in recognition of their contributions and support given to ISCOS over the years.
This year, ISCOS also recognised two staff for their invaluable service to the organisation. Ms Vanishree d/o Ramakrishnan and Ms Nasyrah Bee Binte Mohamed received special awards for their contributions to ISCOS.