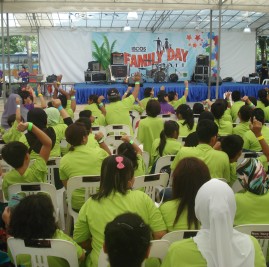 On 24 June 2011, I had the opportunity to volunteer in the ISCOS Family Day event at Sarimbun Scout Camp. It was an annual family day celebration organized by ISCOS, and this year, it was done in collaboration with T-Touch, a staff volunteer initiative of Temasek Holdings.

After some ice-breakers by the motivators of High Achievers, the crowd soon became hyped up with energy. Everyone was ready for the Family Day. Families were grouped into three different sectors for the activities. Befrienders from Temasek followed the families as they moved from station to station. This not only allowed the families to get assistance along the way, it also encouraged interaction between the staff and ISCOS members. Some of the children even got attached to the staff and held their hands as they moved from one station to another.

What I felt that really made this year’s ISCOS Family Day successful was that the programme was very much catered towards bonding the family. At the outdoor area, the sun was scorching hot. Instead of deterring the families from taking part in the activities, it seemed that the heat boosted everyone’s energy level. Families were all enjoying themselves at the stations! At one station, I saw a young girl attempting to move from one swinging rubber tyre to another but was unable to do so. With the help of her brother and her mum, she managed to complete the activity. It really bonded the family as one. At the game booths, I saw children enjoying themselves at the games such as mini-golf and football. Parents also had the opportunity to reminisce the old games they used to play when they were younger.

One young boy caught my attention when he failed to kick the football into the goalpost despite three tries. He turned to his mother, and from his facial expression, it was clear that he was disappointed he could not strike a goal. His mother looked into his eyes and said in a dialect, “It’s okay.” I thought that this was something worth thinking about. The small gesture of assurance is very important to make someone feel confident, especially for a young lad.

At the assembly point, while some members were having a water break, some of the Temasek’s staff put up a dance performance. I believe that much effort was put behind the performance, and I admired them for their hard work (I tried dancing for a school event, and trust me, the training was really tough).

The day ended off with a lucky draw with fantastic prizes sponsored by Temasek. Indeed, everyone was a winner that day. More than the prizes and vouchers that the families have won, what was more valuable was the opportunity for the families to bond and have memorable times together. I believe the staff and volunteers both from ISCOS and Temasek had a wonderful time as well.

After the event, I felt a deep satisfaction looking at the photos I’ve taken. They speak a thousand words as they represent families giving love and encouragement, and at the same time enjoying themselves. “When you look at your life, the greatest happiness is family happiness.”