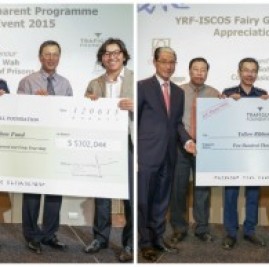 On 12 Jun 2015, ISCOS organised an appreciation event at One Farrer Hotel and Spa for the sponsors of the Yellow Ribbon Fund-ISCOS Fairy Godparent Programme (FGP), which was graced by Mr Soh Wai Wah, Commissioner of Prisons.

“Goldbell always believes in helping others, especially those in difficulties. Through the Fairy Godparent Programme by ISCOS, we would like to give these families motivation and an equal chance in life, lending them the hand they need during such times. In the process, we enrich our lives holistically too,” said Alex Chua, Chief Operating Officer of Goldbell Group.

Trafigura Foundation’s Executive Director, Mr Vincent Faber, shared, “One of our thematic focus areas is education and integration. That means giving young, sometimes marginalised people, the skills and support to build a future where there is hope, purpose and dignity. Through its holistic approach, the Fairy Godparent Programme does just that: ensuring that the family unit stays strong while offering academic assistance to their children”.

The guests were inspired by celebrity guest speaker, Ms Irene Ang of Fly Entertainment, who shared about her struggles as a child when both her parents were incarcerated. Ms Hazirah, one of FGP’s beneficiaries, also spoke about how FGP had benefited her.  The song numbers from the De Imperfection Band of the Pertapis Halfway House were equally entertaining.

The Yellow Ribbon Fund-ISCOS Fairy Godparent Programme is an initiative to grant low-income ex-offenders’ children opportunities to achieve their academic potential, with the aim of helping them to be contributing members of society in future.